Sixers-Wizards recap: The Sixers win an absolute roller coaster of a game, 141-136

What Is Behind the Sixers’ Hot Start?

The Sixers have leaned on their starting lineup more than previous years, and it is paying off so far… 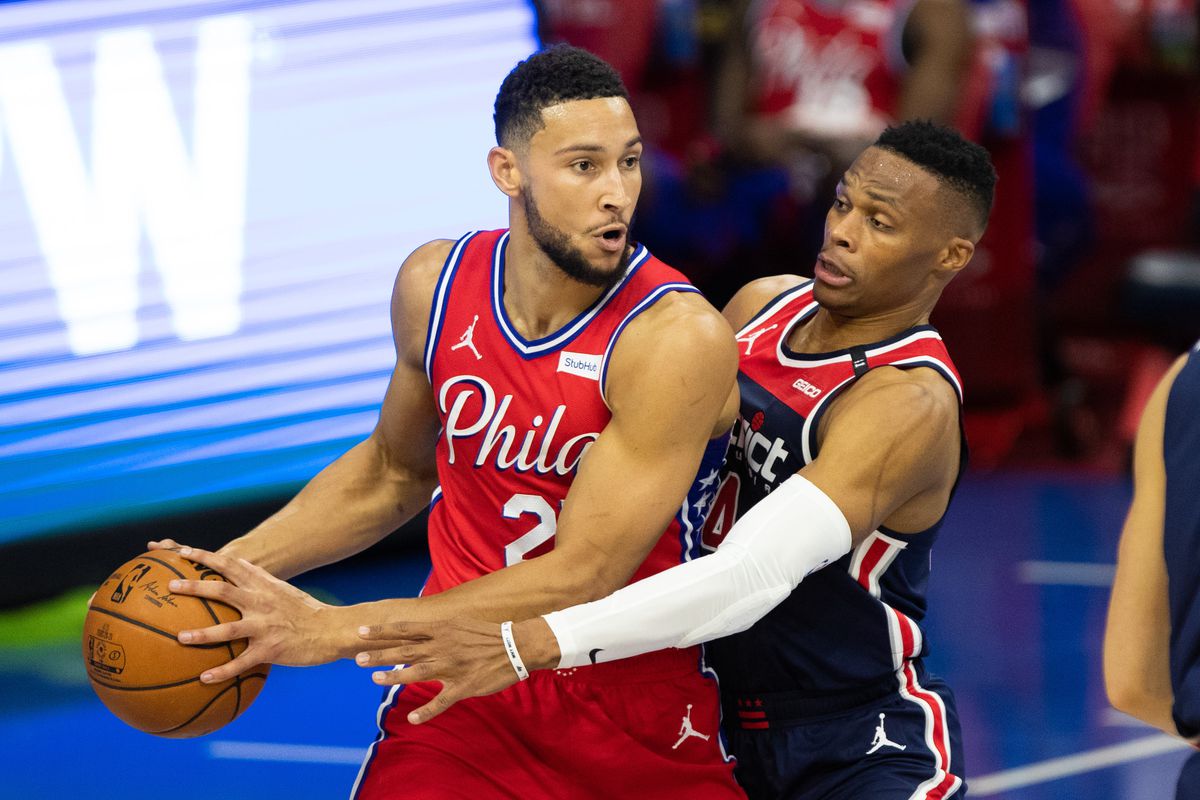 Until the 76ers do or don’t trade for James Harden, their most vital and purportedly discordant relationship exists between Ben Simmons and Joel Embiid. Coming off a disastrous third year as the team’s two most important players, the All-Stars are surrounded by a brand-new supporting cast that was designed to cover up their blemishes and give them space to work. In this fresh ecosystem, their ability to complement one another and simultaneously thrive is paramount to the organization’s short- and long-term health.

Hence, further developing the rapport shared by their two best players feels like the right thing to do. The championship expectations that hover over every decision demand it. But to analyze everything to the best of their ability, Daryl Morey and Doc Rivers have shifted Philadelphia away from one of its signature (and controversial) in-game strategies: Over the past three seasons, Philly’s robust analytics staff devised a rapid-fire substitution pattern that separated its two franchise pillars and prioritized lineup combinations that yielded statistically favorable outcomes.

That approach to rotational configurations appears to be a thing of the past. In the season’s opening seven games, Embiid and Simmons have averaged 27.7 minutes together, which is more than Nikola Jokic and Jamal Murray, Victor Oladipo and Domas Sabonis, and all but 23 other tandems throughout the league. More importantly, it’s also up from the 20-minute average they spent together last year. In the two preceding seasons, Simmons and Embiid coexisted for 23 and 22.1 minutes per game.

The increase is a byproduct of Rivers’s choice to lean on his starting lineup more than Brett Brown ever did—a call back to the Lob City Clippers, which didn’t stagger Blake Griffin and Chris Paul. Overall, 36.5 percent of Philly’s minutes are inhabited by its starting five, a figure that trails only the Thunder and is up from a 28th-ranked 23.4 percent average over the last three years. 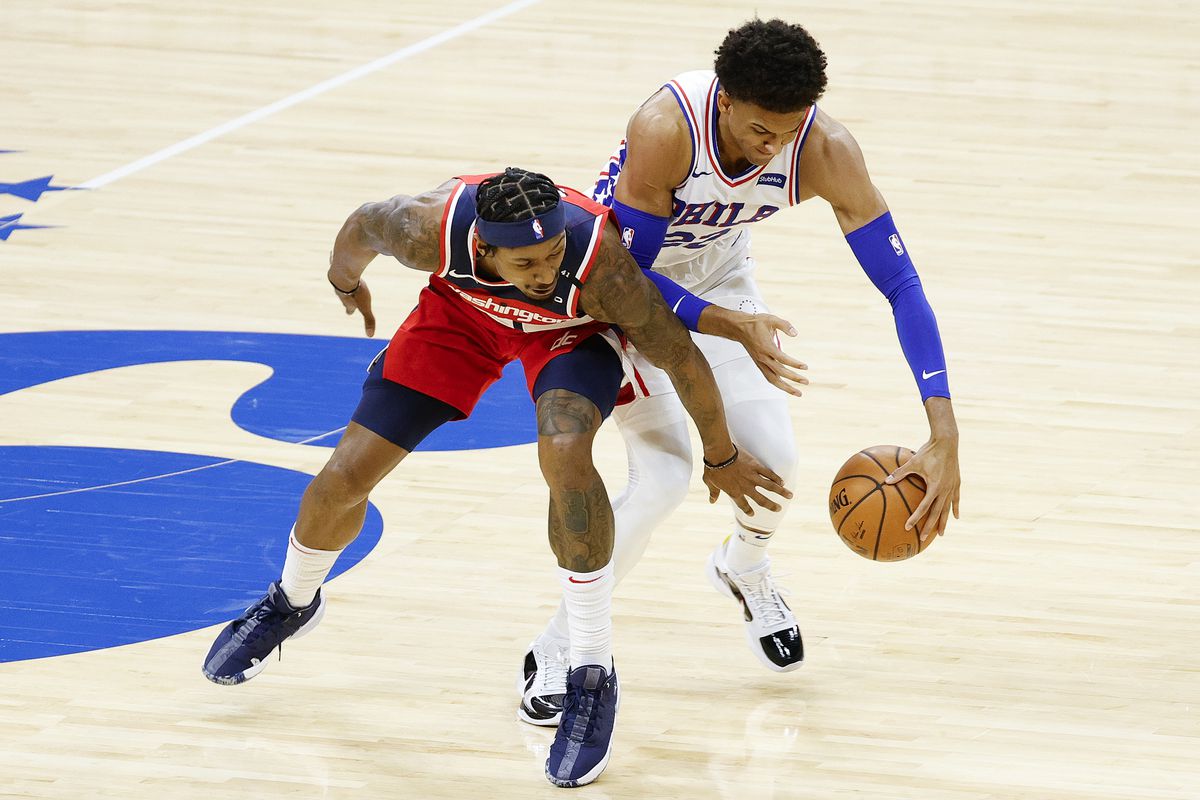 It’s a precise change that’s meaningful for a variety of reasons, including the aforementioned benefit of letting Simmons and Embiid identify any and all hiccups still generated by their stylistically opposed skill sets. But even more meaningful (and jarring) are Embiid’s career-long stints. Instead of subbing out midway through the first quarter and then munching on opposing bench mobs at the start of the second—which was the case in nearly every game he’s ever played in (including the playoffs)—Embiid is now opening the game with 10 or 11 straight minutes of action. He’s on the bench to start the second frame and then closes the half.

Embiid’s minutes average isn’t presently a career high, but that’s due to a few blowouts, where he was able to rest during the fourth quarter. His 38-minute outing against the Raptors had been topped only a dozen times in his entire career, and the 37 minutes he logged against the Hornets was surpassed only three times all last season. The 26-year-old’s health has been a delicate issue since he missed the first two seasons of his career with a slew of injuries. He has only one 2,000-minute campaign under his belt, and a tight back has already sidelined him for one game this season.

The Sixers aren’t dumb and won’t run Embiid into the ground. They signed Dwight Howard and traded Zhaire Smith for Tony Bradley so their most important player could take nights off. But at the same time, Philadelphia knows full well that a lengthy playoff run is impossible unless Embiid’s body and mind can handle the progressively intense grind that environment requires. It’s a fascinating long-term play.

Beyond the uptick in his playing time, Embiid’s spending a vast majority of it beside Simmons is a big deal. Last year, Philly’s net rating was 0.6 when the two played together. Their offense was notably superior when one was on his own, fueling long-held skepticism about their ability to commingle.

So far, the Sixers have had no trouble scoring the ball with those two by each other’s side, with the second-best offense and top defense in the league. They’re back to prospering in the half court, too. But it’s unclear how much of this success can be attributed to a small sample size and Philly’s cupcake schedule. The 76ers have played the Wizards, Cavaliers, Raptors, Knicks, Magic and Hornets twice. It’s possible none of those teams will make the playoffs. (Their only loss came in Cleveland, where Embiid didn’t play.)

Lingering problems haven’t exactly been solved, though. Simmons and Embiid’s direct partnership is still plagued by cramped spacing and awkward timing. Some interactions could stand to press Option + Command + Escape when they turn the offense into a spinning rainbow wheel. The snug pick-and-roll remains a needless catastrophe, and there has already been more than one sequence where Simmons and Embiid look like two people who were first introduced 15 minutes before the game began.

This criticism is a bit harsh for a team that currently ranks third in net rating, but it’s still worth wondering whether Philadelphia can ever unlock the best version of itself through multiple playoff series with two great talents who aren’t offensively in tune. Simmons finally attempted a corner three during the first quarter against Orlando, but it’s only one of two shots that have come outside the paint. His dormant development negatively impacts Embiid, especially against prepared defenses that know how to execute a double-team in the post.

But only time will tell if any of this is fatal with a new supporting cast. Reigning Player of the Week Tobias Harris won’t post 52/47/92 splits forever, but Danny Green and Shake Milton should see their three-point percentages rise as the season goes on. Seth Curry is one of the most accurate shooters who’s ever lived, and that’s exactly what he looks like.

It all comes back to Embiid. If these longer stretches of action better prepare him for the playoffs, then Simmons’s nonexistent outside shot might not matter. Until then, the Sixers suddenly have more opportunities, possessions and situations to figure out everything that doesn’t work, which, so far, isn’t all that much. But these key changes to who plays when and for how long are with the future in mind. It’s a necessary departure from the way business has been done in Philadelphia and could be a significant reason why their hot start will soon be viewed as more than a mirage.